Here's a really innovative way of conning people. Start an online flower delivery service which caters to remote locations. If someone sends you flowers, how often do you call them up and thank them (mentioning exactly what the order received was)? Do you think anyone would really complain that they've received an order of flowers from you with a poor quality gift? They'd sit there saying "How considerate... what lovely flowers..."

Okay, so here's the deal. Place an order for some flowers (with maybe a gift attached to it). Pay a premium on the delivery (since it's timed so well). When the wrong arrangement arrives (with slightly wilted flowers), you, the orderer, would never really find out as they'd be masked through the "niceties" of society.

Let's give you an example of this. I'd ordered the Exotic Life Size Arrangement from fnp.in. The description? 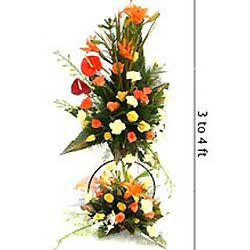 Mind blowing arrangement of 100 Seasonal and Exotic Flowers..3 to 4 ft high…for someone very special in your life..

This was supposed to be sent to my mother (who coincidentally lives in the same house as I do at the moment), so when the delivery arrived I was at home to receive it.

Okay, so now you're thinking "So what actually got delivered?"

The order note said Life Size Arrangement (which is 25% cheaper incidentally) and is described as: 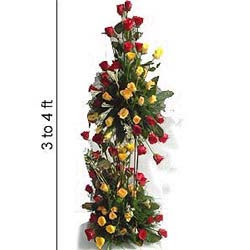 Your feelings reach new heights with this expression of LoveÃ‚Â….An arrangement of over 100 Red n Yellow Roses of around 4 feets high.

What actually arrived was however quite a few (definitely more than 70) pink roses about as tall as my dogs (how does 2½ ft strike you?). It was quite nice in a few ways, but nowhere near what I'd ordered. 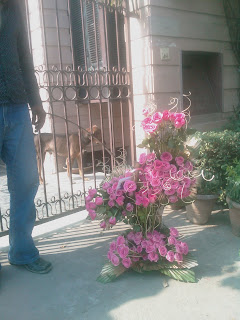 The order process itself was difficult enough. Yatra.com advertises a partnership with a discount of 25%. They even give you a promo code to enter on the fnp.in site to avail of this discount. When I tried using the promo code I got a "Sorry!! Try again" repeatedly. I thought it may be a problem with the code I was given, so called up Yatra (where a customer service person asked for my user names and passwords on both Yatra.com and fnp.in – I even provided them in the interest of getting this worked out). They acknowledged that there was a problem with the fnp site.

I tried using an alternate promotion (for ICICI bank account customers) which gave me the same error, so called the fnp customer care and was asked to "please try again in half an hour as there may be a technical issue". Strange that 22 hours later it's still not working with ICICI.

I got a little fed up with speaking with the person on the phone so left a comment on the website about the it not working properly and was surprised (quite pleasantly) by a call from Ashish the webmaster who informed me that he could help me with my order if I could order it on my ICICI card (and get a 20% discount instead of 25%) as they'd stopped the promotion with Yatra for Diwali (but still hadn't contacted Yatra with this information).

I mailed him the order details (along with my ICICI bank debit card details – I was wondering how he'd get the payment through with this info, but he'd asked me for it so I sent it). I got a call back a few minutes after sending the mail saying he wanted a credit card rather than debit card. I don't have an ICICI bank credit card, so gave him my HDFC credit card information for him to use, which he said would be okay.

It's arrived... and just as I was getting on the phone with the company again. They've added a top to the original one they sent, not quite what I'd ordered, but it' still nice. 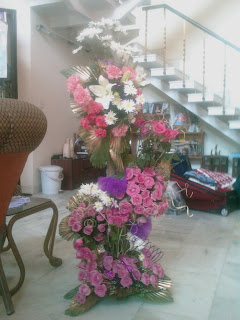 I don't think I'd have written this entry if this was the first time I'd had such problems with them, but then I didn't get to see the last order they'd dispatched and assumed it was a one-off mistake. Hope they're not doing the same thing with you.
Posted by De at 11:16 am